Setting SMART Goals is the key to engage workforce - Empxtrack

Setting SMART Goals is the key to engage workforce

Here is an exemplary story about a swimmer who set a world record in swimming:

“When she looked ahead, Florence Chadwick saw nothing but a solid wall of fog. Her body was numb. She had been swimming for nearly sixteen hours.

On that Fourth of July morning in 1952, the sea was like an ice bath and the fog was so dense she could hardly see her support boats. Sharks cruised toward her lone figure, only to be driven away by rifle shots. Against the frigid grip of the sea, she struggled on – hour after hour – while millions watched on national television.

Alongside Florence in one of the boats, her mother and her trainer offered encouragement. They told her it wasn’t much farther. But all she could see was fog. They urged her not to quit. She never had . . . until then. With only a half mile to go, she asked to be pulled out. Still thawing her chilled body several hours later, she told a reporter, “Look, I’m not excusing myself, but if I could have seen land I might have made it.” It was not fatigue or even the cold water that defeated her. It was the fog. She was unable to see her goal.

Two months later, she tried again. This time, despite the same dense fog, she swam with her faith intact and her goal clearly pictured in her mind. She knew that somewhere behind that fog was land and this time she made it! Florence Chadwick became the first woman to swim the Catalina Channel, eclipsing the men’s record by two hours!” 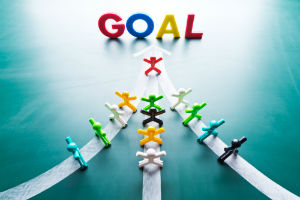 The moral of the story is that a clear vision about your goals is necessary to achieve your target.

This story is equally true when applied to human resources management. Giving employees a clear description of the goals (in form of a written Goal Sheet) can help them to achieve their individual and organizational targets.

Goal Setting and Tracking not only helps organizations in tracking employee’s progress but also helps employees in understanding what they are supposed to achieve, how to achieve it and how much they have achieved it. A well defined Goal Sheet should have goals, targets, tasks and measures required to achieve a goal. Goal sheet should be in a written form available to employees through intranet/ internet which allows them to refer back to their goals and targets often; and report to their manager about the progress against goals, so both employee and manager know how much their team has achieved.